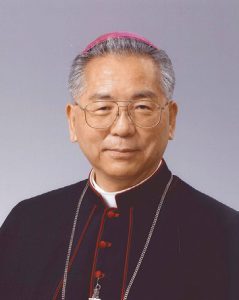 This play reveals how Christianity developed after its introduction to Japan and in particular how the hidden Christians eventually encountered the real priests whom they had been longing to meet throughout the entire 250-year period during which Christianity was banned. Their encounter marked the discovery of the hidden Japanese Christians and the historic dawn of the resurrection of Christianity within Japan. The play splendidly depicts the difficulties and suffering, the confidence and the hopes of the hidden Christians in defending their faith. I am delighted that English subtitles have now been added, and trust that they will enable many more both within and beyond Japan to share the emotions and truths that spring from the stage.