Francisco Xavier (1506-1552) The first missionary to bring Christianity to Japan. Born in Spain. Founded the Society of Jesus with Ignatius de Loyola. Arrived in Japan on August 15, 1549 and evangelized west Japan for over two years. Canonized in 1622. Called the “Apostle of the Orient”.

Christian Daimyo キリシタン大名 (Christian feudal lords) 86 Daimyos were baptized. But when Hideyoshi turned against Christianity and ordered his subordinate daimyos to renounce it, many obeyed except Takayama Ukon. Some followed superficially, but eventually yielded.

Omura Sumitada 大村純忠 (1533-1587) The first Christian Daimyo. He opened the port of Nagasaki and had his people become Christians.

Takayama Ukon 高山右近 (1552-1615) Baptized by a Japanese missionary, and given the name Justo. He built churches and moved a seminary to his domain. He abandoned his fief and status rather than obey Hideyoshi. Banished to Manila in 1614, he was beatified in 2017.

Tensho Shonen Shisetsu for Europe 天正少年遣欧使節 (1582-1590) Planned and escorted by Fr. Valignano and dispatched by Christian lords, four young envoys were sent to Europe to observe the Christian world. Pope Gregorius XIII gave them an audience. They returned with a printing press.

Dochiriina Kirishitan どちりいなきりしたん (Christian Doctrine) This was the catechism. Four editions were printed: the “Doctrine for Japan” in Japanese script in 1591(?), an alphabetical version in 1592, with both reprinted in 1600. These were invaluable in promulgating without a priest and were long handed down among the faithful.

Rulers 天下人 Christianity entered Japan when many feudal lords were battling for power and unification. The top three rulers then were:

Oda Nobunaga 織田信長 (1534-1582) Started as local daimyo, but conquered the neighboring daimyos to become the most powerful. He was killed by a subordinate’s treachery. He was full of curiosity and had welcomed Christianity.

Toyotomi Hideyoshi 豊臣秀吉 (1536-1598) After Nobunaga’s death, became the most powerful and unified Japan. Initially he was tolerant of Christianity, but he feared colonization by Catholic nations. In 1587, he ordered the missionaries to leave Japan and his daimyos to renounce Christianity.

Ban on Christianity キリシタン禁教令 First by Toyotomi Hideyoshi in 1587, and later by Tokugawa Ieyasu in 1613.

Japan’s Martyrdom of the Twenty-six Saints at Nishizaka 日本二十六聖人の殉教 西坂 Under Hideyoshi‘s decree, 26 Catholics (including six foreigners and a 12-yearold Japanese boy) were put to death in Nishizaka, Nagasaki (1597). Japan’s first martyrs were beatified in 1627 by Pope Urban VIII and canonized in 1862 by Pope Pius IX.

Religious Census 宗門改め In mid 1600s, the Tokugawa Shogunate established a census to determine the religion of each family and individual and ordered every domain to implement it. Abolished in 1873.

Registration to the Buddhist temples 寺請制度 (Temple Parishioners System) In 1624 the Edo government decreed that everyone must register their names at a temple and become Buddhist parishioners. The temples issued certificates for travel and moving.

Fumi-e/Ebumi 踏絵 (ふみえ, えふみ) ”Fumi-e” literally means a picture to trample on. It can be a Christian image (Jesus, Mary, or a crucifix) on paper, wooden block, or cast in bronze, etc. People were ordered to step on it to show they were not Christians. Recently, this act is called Ebumi or Efumi, but this DVD adopts the widely-used word “Fumi-e” for the act also. 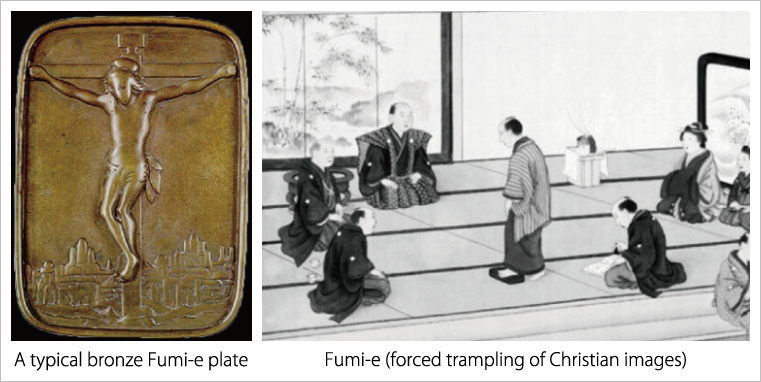 Hidden Christians Nowadays, they are categorized into three groups.
1. Sempuku 潜伏: Those Christians who returned to the Roman Catholic Church
2. Kakure 隠れ: Those who do not return but continue their ancestors’ practices.
3. Wasure 忘れ: Those who forgot the past and became Buddhist parishioners. 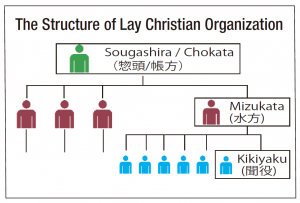 Sougashira 惣頭/Chokata 帳方  ”Sougashira” literally means the head person and “Chokata” the registrar. He was the head of Christians in a whole village, kept calendar, and transmitted correct catechism and Catholic calendar information to the villagers via Messengers.

Mizukata 水方 (Baptizer) Literally means a water officer. He carried out baptisms in his area (a “Gou” 郷 or sub-village).

Kikiyaku 聞役 (Messengers) Literally means listeners. They served smaller areas within the sub-village. They gathered at the Chokata’s home on Sundays to hear information, they then passed on to every other household.

Maria Kannon マリア観音 Hidden Christians secretly revered porcelain statues of the Buddhist deity Kannon (the goddess of mercy, often with a child in her arms) from China, treating them as disguises for the Virgin Mary and Child Jesus.

Sebastian’s Legend バスチャン伝説 Sebastian was an active Japanese missionary. He was caught and tortured 78 times, and finally beheaded. Sebastian was famous for his daily calendar and for his prophecies, “In seven generations, confessors will return and hear our confessions.”

Konchirisan コンチリサン The word came from Portuguese, meaning contrition. Hidden Christians prayed the ACT of contrition especially after Fumi-e. They asked for God’s forgiveness, and were very eager for the confessors’ return.

The Fourth Urakami Persecution 浦上四番崩れ (1867-1873) First, the leaders and elders were exiled in 1868, then, in 1870, the whole village of Christians were exiled. In total, more than 3,000 were exiled and tortured, with 700 martyred. Protests from foreign countries made the Meiji Government withdraw the signboards banning Christianity.

Oura Tenshudo 大浦天主堂 (Oura Catholic Church – the Church of the 26 Martyrs 日本26聖殉教者天主堂) Built in 1864 by Bernard Petitjean. People called it the “French Temple”. Famous worldwide as the church where the Hidden Christians confessed their faith after 250 years of silence. Also referred to as the “Resurrection of the Japanese Catholic Church” and “Miracle of the Orient”. Designated as Basilica Minor in 2016.

Urakami Catholic Church 浦上天主堂/教会 Construction began in 1895 on the actual site where fumie/ebumi had been enforced. Upon completion in 1914, the church was dedicated to the Virgin Mary. Destroyed by the atomic bomb on August 9, 1945, it was rebuilt in 1959 and became a Cathedral in 1962.